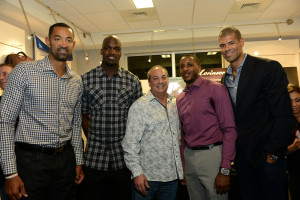 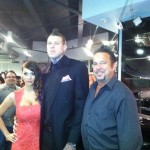 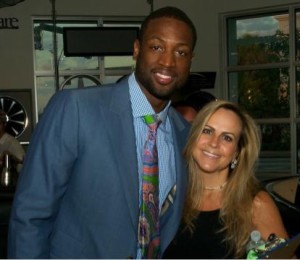 Hey! Welcome to 52 weeks until I’m 50 years old! Actually it’s now 31 weeks until I’m 50! If you are new to my blog, to the right are other subjects I’ve written. Some may resonate with you or at least give you a chuckle. If you are counting down with me…Wow! I can’t believe how fast the weeks are flying and I’m so glad you are still with me!

I am a huge fan of the Miami HEAT. Been for 25 years. I’m super grateful because I’ve met and chatted with many of my favorite players over the last few years. If you’ve read an earlier blog below, you’ll remember how I babbled on with Shane Battier, the Duke of Defense!

In October 2012, my 60-inch TV blew. I told my husband I wanted to purchase a projector and screen to create my “court-side seats” in our great room which includes my kitchen and a cafe area. He looked at me like I had two heads. Having a 102″ screen will make you happy…I promise. Did my research, had a few specialist out and by mid-October, Al from Sound Waves was installing my big screen, Direct & Apple TV for me. Oh yeh…this experience is “immersive.”  I love my GATOR football, the NY Giants (a fan through my hubby but I also love watching the anywhere my Gator football players wind up), my HEAT and GATOR basketball…all my teams games are downloaded to my outlook schedule. Looking back…counting it down, the finals were more than basketball games. They were scrapbook moments for me.

The season may be over but my friendships grew deeper than ever. As much as I looked forward to any heat game,  I couldn’t wait to celebrate whatever happened with my core group of friends both virtual and in person. You know who you nuts are. They are passionate creatures. Weirdos to the core. And I love them with all my heart! Feelings for our team members run deep. When they lose, it’s painful. When they win, we are elated! And we are not social during the games. We are dedicated, focused fanatics. We argue out loud with refs, announcers and of course, one another!

I traveled through Europe for 17 days during the semi-finals. Updates on Viper, KIK and Facebook from friends during the semi-finals were keeping me in the loop. It was driving them and me nuts that I was 7 hours ahead and texting at 3 am. We weren’t watching at “Press Sports Bar” on the immersive 102″ screen…coaching them, yelling, jumping out of our seats screaming, cursing, hi-fiving our players every move court-side! And then came the finals. Our core group added friends, family and anyone who wanted to bring food! Ha! We were ridiculous. Our consistent behaviors…My father-in-law only wore black shorts under his jeans and would take them off at the beginning of the fourth quarter. My mother-in-law sat in the same seat all season and through the finals in her red HEAT shirt. My husband wore his grey washed out team shirt with the spots …I didn’t want to throw it out because I’m superstitious. I wore my white Old Navy lounge pants with my black sparkleee custom-made HEAT shirt and sat in the same seat…knee bent, eyes glued arguing with the refs making the calls. My kids would wander in and out while watching us argue during different plays. My buddy Zo, sneakers off, socks on, sitting Indian style next to our friend bones…a silly full length skeleton I just never put away from Halloween because we kept adding funny phrases while watching the games! “I can feel the win in my bones…”  And of course my other homey’s Ron and Dorothy who were present for some really crazy games like the come from behind Cleveland win during our streak watching the one game at BRU’s Room while the place totally erupted.

I realized long ago how ridiculous and superstitions I was. I saw it in my core HEAT buds this year especially! I was exhausted from the finals. You would have thought I played on the team! My knee hurt from being bent, I lost my voice, my emotions were all over the place. I couldn’t sleep after the games even when they won! I was disgusted by the refs choice of calls. Who was going to guard Parker? Was Duncan ever going to miss? And…for heaven sake…don’t let shooting guard Kawhi Leonard shoot damn it! I wondered at times when my HEAT players were going to “flip the switch” and show me what I knew was there all along.

We had an amazing season, our 27 game streak, the come from behind Cleveland win, the Pacer series without our core group being together….and all the silly things we made up and did! Bones, skipping around my house, Magic Ass…that’s a whole story for another time! Sharing good food and moments for my virtual scrapbook that always left me with a big smile! I embraced my homey’s and family with hundreds of hugs and kisses. We realized our loyalty towards our team and one another… talking on the phone during games when we were in different places and texting until our fingers hurt or started to bleed. I don’t know about you, but I felt the HEAT! I am proud of how they behaved during the season, before and after the games and they never began an interview without sharing that the Spurs were a class act. We aren’t only sizzling here because of the temperature…We are proud to be celebrating the HEAT!